The Sticks 2022 was the inaugural year for this race. As usual, Chase and I were blown away by how many people showed up for this wild-child race idea we had. This race offers runners many races to pick from 6, 12, 24,48, and even 72 hours! Having such a variety of options opens up the field to every kind of runner.

The Sticks takes place on my parents’ homestead in the sticks of Norton, Kansas (population 2,761 in 2020). Chase and I have always wanted to put on a timed race and have searched for the perfect format and location for multiple years.

The way this race came to be is pretty inspiring. My father, who is in his 60s (I won’t give out his actual age, lol), wanted to train hard to be able to pace Chase during his attempt at completing the Cocodona 250. There isn’t a ton of rugged terrain to train on in rural midwest Kansas, so my dad got a wild idea to mow a path through his pasture to train on. Once we saw the trail, we said, “what if…?”. My parents fully supported the idea, as they do all our crazy ideas; thus, The Sticks was born!

What is The Sticks?

The rules for The Sticks are pretty simple: runners from each race run a 3(ish) mile loop as many times as possible in the time option they chose. Additionally, runners can take a 6.3-mile dirt road loop every 6 hours. They can only start those loops during a designated hour but do not have to finish the loop during that hour. Pacers are only allowed for the 48 and 72-hour runners. That’s it: pick a time you want to run and do it!

The Sticks 2022 saw runners from 8 states, 25 runners in total. Interestingly, the most popular race was the 72-hour, which means that there are more crazy people in this world than we will ever know!

The 72-Hour race began on Thursday evening, another fun twist we added in. Not many races start in the evening, and we thought we would change things up a bit. This also allows for

a Sunday evening finish. Seven runners were toeing the line at the start of this event; three women and four men.

The youngest runner in the entire race was in the 72-hour race, 18-year-old Ethan Kimes. Ethan drove up from Texas and missed his high school graduation to participate in this event! It is safe to say that Ethan learned all about the good, the bad, and the painful regarding ultra-running.

The weather Thursday evening and Friday evening was beautiful, if not warm. The weather can be crazy and unpredictable in Kansas, but the 72-hour runners caught a break for the first 24 hours of their race.

The 48-hour and 24-hour runners gave the 72-hour runners some company beginning on Friday evening. Starting that race added nine more runners to the course. The great weather held out through the event’s second night, and the runners put in many good miles!

On Saturday morning, the course got much busier with the addition of the 6 and 12-hour runners. JJ Goodrich came out from California to run for 6 hours in nowhere, Kansas!

Things got a little interesting Saturday evening, with some gnarly weather rolling through. The weather was bad enough with lightning and heavy rains that we had to close the race for a couple of hours while it went through. The only runners on the course still were the 48 and 72-hour runners.

My parents graciously invited everyone out of the rain into their house, and we all had some really good sleep-deprived conversations!

Once the storm passed, we opened the course back up, and the runners didn’t hesitate to get back out there and put in the miles. The weather was beautiful for the rest of the race, but Kansas had to throw in at least one storm!

The Sticks 2022 was said to be half race, half hootenanny, and I think it lived up to that. Thanks to our sponsor, Boot Hill Distillery, we had plenty of help with the hootenanny half of the race. Many runners who finished on Saturday stuck around, cheering the rest of the runners on while imbibing some Whiskey. Legend has it that there was even a bottle of Fireball for the runners out on the course…

First place female and the overall winner of the 72-hour race was Rachel Baker, from Springfield, MO. Rachel made a fantastic effort, racking up a total of 153.7 miles, to squeeze herself into first place and a PR! She kept hammering away at the course and stayed consistent throughout her three days in The Sticks. She had some great pacers and crew to keep her moving well.

Coming in second was Tyler McDaniel from Kansas City, MO. Tyler was a close second, only .5 miles behind Rachel, with a total of 153.2 miles!

Third place in the 72-hour race went to a Kansas ultrarunning legend, Elden Galano from Wichita, KS. Elden racked up 105.1 miles over his three days in The Sticks. Elden is our good friend from the ultra-running community, and we were so glad to watch him battle for that 100-mile buckle. It was his first 100-miler in a while, and it was an honor to be a part of it!

First place in the 48-hour race went to another Kansas ultrarunning legend, “Iron Will” Sprouse. If you didn’t know, Will had a major stroke but is overcoming the challenges of his recovery. Will racked up 101.45 miles over two days.

Our 2nd place runner in the 48-hour race was Tony Mathison, all the way from Texas! Tony accumulated 70.35 miles. 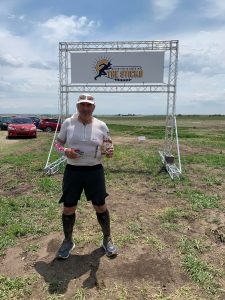 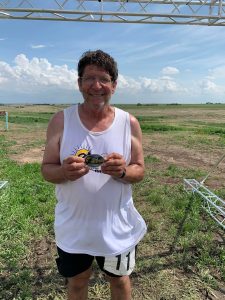 The 24-hour race was won by Scott Hagerty, who tallied 92.1 miles! Scott started strong and finished much the same, grinding his way through the course.

Our 12-hour race ended in a tie for both the men’s and women’s divisions! For these four runners, it wasn’t about the win. It was about community and pushing themselves; we love to see it!

Joey Edwards and Cody Baker tied first in the men’s race with 49 miles each. For the women, it was friends Bev Exposito and Penny Schmeidler with a tie at 33.75 miles. 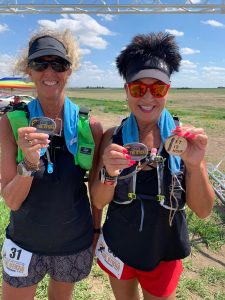 The 6-hour race was lightning fast, and so were the runners. Four runners racked up equal mileage to have a 4-way tie in mileage. When this happens, the winner is determined by whoever is fastest to accumulate that mileage. Ultraverse athlete ambassador, and speedster, JJ Goodrich won the 6-hour race with the fastest time to reach 30.7 miles. The first place female with 30.7 miles was Amy Driskill.

Chase and I sincerely want to take the time to thank each and every person who came out to The Sticks 2022 and supported our inaugural year for this event. Seventy-two hours was a long time to be an RD without much sleep, but it was such a rewarding experience for us. We watched runners push themselves through the pain (and fear of snakes), and many runners who have never run a race like this came out to support us.

Once again, thank you to the runners, and a HUGE thank you to my parents, Ken & Kim Carter for letting us camp out on their farm for 72 hours. They put in a lot of work with us for this event! We hope to see you all at the Sticks 2023!

We have already set the dates and opened registration for The Sticks for 2023. It is sure to be another hootenanny, and we are so excited about it! Make sure you sign up early to get the lowest registration prices. You can learn more about The Sticks on our website.

The 6-hour race begins Saturday, June 3rd, at 6 AM and ends at noon.

We also have a unique race rewards system that we offer runners of our races. We know that race prices can quickly add up and bust the bank over time. We wanted to help out with that, and you should definitely check it out if you run multiple races each year.