We were able to attend the inaugural year of the Cactus Roulette race on January 29, 2022.  This race is put on by the Trail Hawks and takes place at Clinton State Park in Lawrence, KS.  We knew going in, that it would be a great race, as the Trail Hawks put on several awesome races in Kansas.

Runners can sign up for the 6-hour, 12-hour (two different start times), or 24-hour race.  The 24-hour and the 12-Hour Owl race began on Saturday at noon.  This is very different from most races.  Many races start first 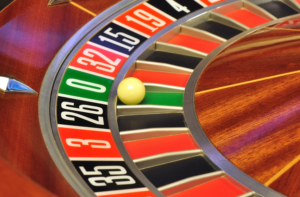 thing in the morning.  I think this adds some more difficulty for some, especially 24-hour runners, as they have likely already been up several hours prior to race start.

The Cactus Roulette is a unique concept for a timed race.  The coolest part of this race is that runners have to spin a roulette wheel at the beginning of each lap to see which lap they are required to run.  Additionally, the winner of the race receives free entry into the next year’s race.  Another notable part of the race is that they were offering first place 24-hour finishers, both male and female a cash prize of $250 if they completed at least 100 miles during the race.

Each time a runner finishes a lap, they are given a poker chip that reflects which course they completed.  They are also given a holder to stack their chips in.  This is a cool visual to see how many laps you have done, and on which courses.

Chase signed up for the 24-hour race so he could get a long race in before the Cocodona 250 in May.  The format of this race was perfect for him to really nail in his nutrition, pace, gear, etc.  Additionally, the race date worked well, as he could fully recover and continue his training for Cocodona.

I can’t speak for everyone, but we were so happy with the weather for this race.  Having a race in Kansas in January can be risky.  Just the week before, the wind chills placed the temperature as low as -10, and the week after the race was also cold.  However, the weather on race day was perfect!  The sun was shining, there was little wind, and the temperatures were in the 40’s.  Even better, there was no snow to be found.

Throughout the duration of the race, I could see the toll the courses were taking on the runners.  The routes were no joke!  While the runners didn’t have to go long without aid, the trails they were running on were not easy by any means.

As night fell, the runners were more spread out, and coming through the aid station at very different times depending on their pace and the course they had spun prior.

Chase had spun a long stretch of mostly the blue course (swim beach), with maybe one or two green courses sprinkled in.  He was begging the roulette to throw him a red course for a reprieve and the ability to increase his pace.  As luck would have it, he was able to run the red course 5 times in a row!  That was a huge mental boost for him.  By this point, there were only about 6 miles between him and the 2nd place 24-hour runner.

During one of his blue course runs, Chase ended up catching his foot on a rock and falling.  Luckily, he was able to catch himself with his hands, but he tweaked his knee.  Knowing he had a huge race coming up that he needed to be 100% for, he made the decision that he was just going to hike the rest of the time on the course.

I went with him on a hike of the blue course right before sunrise.  At this point, there was only one other 24-hour runner left on the course with him.  Chase was approximately 13 miles ahead of this runner, but there was still plenty of time for him to catch Chase.

Knowing this, Chase decided to spin the wheel again and go for one last lap to ensure he would maintain first place.  Of course, he landed on the blue course again!  He and that course were besties by this point!

I hiked that last lap with him as well, and we were both quite tired by this point!  When we got back to the finish line, one of the Race Directors was there waiting for us with Chase’s first-place award.  It turns out that last lap was not necessary (or several others), as the other runner had decided to call it quits while we were out on the course, thus securing the win for Chase.

In total, Chase ran 76.1 miles.  He ended up calling it a day around 8:30 AM instead of running the full 24 hours.  His original plan was to get 100 miles, and he was on pace to do so after 12 hours.  However, after he fell, he knew he needed to take it easy and went with Plan B – win with as few miles as possible.

Chase has always struggled with taking in enough calories during races and often has to battle a lot of nausea.  We are pumped to say that Proxima C worked perfectly for him!  He was able to get through the entire race without any GI issues, which has NEVER happened.

If you are interested in learning more about Proxima C, you can check out its page.  It will be released early this year, so sign up for notifications!

Another awesome performance was put on by Tyler McDaniel, who just happens to be part of Team Ultraverse!  Tyler ran an impressive 60.4 miles during the 12-hour Owl race.  He cut his last lap pretty close, with under five minutes to spare!  Overall, Team Ultraverse had a great showing at the inaugural Cactus Roulette!

The winner of the 12-hour Lark race was Sean Frost, and his finish was a close one!  He went out for a final lap without much time left on the clock.  Sean made it back with less than two minutes to spare to earn the win!  We were already gone by then, but this would have been amazing to watch!  Congrats, Sean!

We really enjoyed our experience at the Cactus Roulette.  As always, the Trail Hawks put on an awesome race.  We wanted to thank them all, as they did an outstanding job.  Being race directors ourselves, we know the crazy logistics that go into race planning, and they pulled it off flawlessly!  Also, huge thanks to all the volunteers for helping out at the aid station.  It was super cold overnight, and they handled it like champions!

We look forward to going back in 2023, and seeing how far Chase, Tyler, Sean, Ann, and everyone else can go next year!

If you are interested in running the Cactus Roulette in 2023, you can learn more by joining the Facebook group.  You can also find information on Ultrasignup.