On April 23rd, 2022, Kansas saw it’s first-ever Backyard Ultra, Eternal Damnation 2022.  Eternal Damnation is a true last man (or woman!) standing event, meaning the race goes on until only one runner remains. This event was held on the Switchgrass Mountain bike trail system at the beautiful Wilson State Park.

What is a Backyard Ultra? 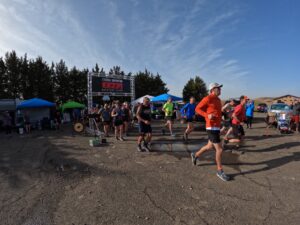 If you aren’t familiar with what a Backyard race is, here are the highlights:

The course must be ~4 miles in length.  Each lap of the course starts precisely every hour after the last.  All competitors must start at the bell (you cannot start a lap late).  This means that all runners must be in the starting corral at the top of every hour to start the lap.  Every lap must be finished within the hour to be counted, including the final lap of the race.  The winner of the race is the last runner to complete a loop.  If no runner can complete one more loop than anyone else, then there is no winner.

A really cool part of Backyard ultras is that you don’t have to be the fastest runner to do well.  In fact, some might argue that running loops fast and being back early every lap is a terrible strategy.  Eternal Damnation is about grit and the determination to finish another lap.  It is a great race to test your limits and attempt to go further than ever in a race.

Eternal Damnation 2022, was a great inaugural race.  The inaugural year saw 40 runners in the starting corral for the first lap.  As is typical this time of year in Kansas, race weekend weather was a little all over the 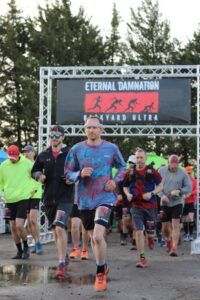 place.  It was a chilly start, a windy day, but also one of the hotter days so far this year.  Many runners haven’t had a chance to heat acclimate by this time of year, so hot days can really have an impact on runners throughout the course of the race.

Roughly half of the field had called it a day by the time runners hit the 20 mile mark.  15 runners made it past a 50K.  We saw many runners set PR’s, and put on gritty performances.  One such gritty performance came when Erin O’Connor barely made it across the finish line on her 4th yard due to severe cramping.  It took everything that girl had to not literally crawl across the line.  Those are the things that, as a race director, we LOVE to see.  Efforts like that are what make these races so epic and fun for us to put on!

There were also runners who weren’t going to make the cutoff for a particular loop.  Instead of cutting the course and walking it in, they ran to the finish, knowing that their lap wouldn’t count and their day was done.  It’s not always about winning.  It is more about pushing yourself to an uncomfortable place, and leaving it all out on the course.

Many runners hung out after their race was over to cheer on the rest of the runners.  This type of race is so fun to watch and crew.  In fact, these are my favorite races to crew Chase at.  You get to see your runner every 50-ish minutes, and you get a front-row seat to the action.  I am sure the remaining participants enjoyed having the crowd there to cheer them on.

If you know much about ultrarunning, you know that it is a competitive, yet wildly supportive community.  Every runner wants their competitors to do well.  It is kind of a strange thing to wrap your mind around until you see it in person.  This community is nothing like the shorter race distance groups (no offense!).

A great example of the comradery and sportsmanship of ultrarunning came about on the lap to get 100K.  At this point in the race, there were only 3 runners left: Paul Linde, Matt Scarlett, and Tim Fryer. Each lap, runners do a .75 mile road section, then loop back and head into the single track trail portion of the lap.  Chase had gone out to the trail entrance to cheer the remaining runners on.  All three of them arrived to the trail entrance at the same time.  This was due to both Paul & Tim’s headlamps dying!

Without a headlamp, it would have likely been impossible to finish the yard in time on our course. The runner’s asked if it was legal to go back and grab a headlamp from their crew, and I informed them that it was not – there is no crew assistance allowed outside of the crew area between yards. Once you start each new yard, you’re on your own. Paul said that he was done and took a few steps toward the crew area. Matt and Tim quickly encouraged him to keep going and assured him that the three of them could make it with Matt’s headlamp alone. Paul agreed. 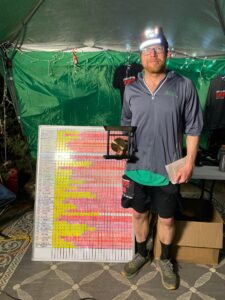 All three runners finished that yard side-by-side in about 55 minutes. It was an amazing thing to see- the three final runners coming in together by the power of Matt’s headlamp. It was just another example of what makes The Backyard style (and ultra-running) such an incredible thing. Matt could have run ahead at any point during that lap, leaving his competitors in the dark and essentially sealing a victory. But he didn’t. Instead,
Matt helped them complete their yard. Matt and Paul both dropped after that lap, leaving it up to Tim to complete one more yard for the win, which there was never any doubt he was capable of doing.
Throughout the entirety of the race, Tim ran like clockwork.  He came in about 10 minutes before the start of the next loop, every loop (save for the one he had no headlamp).  Since he was the winner of Eternal Damnation 2022, Tim gets a free entry into another Backyard ultra, 4 Fore 30 Infinity Backyard Ultra, which is a Backyard Ultra (the biggest event!) Silver Ticket race.
Congratulations to all participants from Eternal Damnation 2022.  We cannot thank you enough for coming out and supporting us on our inaugural year.  Also, a huge thanks to my parents, Kenny and Kim Carter, as well as Chase’s mom, Cindy.  They worked hard helping us put this race on, and we are so thankful for their support. 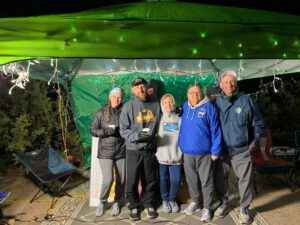 We literally had a blast putting this race on.  We met several great new runners, and got a chance to catch up with some friends from other ultras we have been to.  You guys are what make putting these races on worthwhile.  Results from this year’s race can be found on Ultrasignup.
If you ran, watched, volunteered, or crewed Eternal Damnation 2022, please feel free to leave a comment with your highlights and stories from the day! It is impossible for me to fit all of mine on this writeup!  Also, we don’t get to spend any time out on course, and I am sure that’s where all the fun happens!

Registration for Eternal Damnation 2023 is now open.  More information on Eternal Damnation is available on our website.  If you are interested in running, please join the Facebook group, where all important announcements will be made.
Anyone can win.  All they have to do is never quit!