The Cowboy 200 is a point-to-point ultra in Northern Nebraska that also offers a 100-mile option. 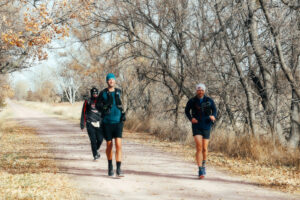 The race started on a dark, 26-degree morning on November 5 in Norfolk, Nebraska. 200 milers headed west on the Cowboy Trail towards their final destination of Valentine, Nebraska. Along the way, they ran through numerous communities which hosted the aid stations.

That was one of the unique aspects of this race. The communities were beyond supportive of this race. Runners would be hard-pressed to find towns that ultras run through that are more friendly and supportive. Two of the manned aid stations were staffed fully by the communities they were in, and several others had local volunteers who had never heard of ultra-running before this race. Runners were definitely shown tons of Midwestern hospitality.

Speaking of hospitality and kindness, runners were also treated to mid-race and post-race massages by David Simmons with Happy Hawk Massage.  David was there throughout the entirety of the event, giving out free recovery massages!

Besides the first afternoon, the weather was quite chilly for the race, and many runners found themselves wearing all the clothes they had packed. The wind played a significant factor, with Sunday and Monday being the worst. This was also when the 100-milers joined in on the fun, starting in Atkinson on Sunday morning.

With both fields on the course, Mother Nature tested the limits. There was a constant headwind, with higher gusts up to 50 mph on Monday. In Nebraska, the weather will always be unpredictable, adding an interesting challenge to Cowboy.

Aid stations Sunday and Monday night saw a lot of discouraged runners, but many were able to pull it back together and make the final push from the last manned aid station. This was no easy push, with 25.3 miles to the end, with one unmanned water station a little under 10 miles in. Why make the end of the race easy? 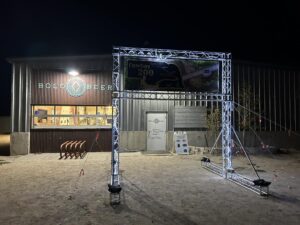 Speaking of the end, the race’s finish line location was another fun aspect of Cowboy. Bolo Beer Co. in Valentine allowed us to set up shop for 3 days and nights! This created a lively atmosphere to greet finishers as they completed the race.

Chase (my husband and co-race director) and I loved directing this race. Over 84 hours, we grew attached to participants, and we may or may not have teared up many times watching runners cross that finish line. Either Chase or I were there to watch every single runner cross the finish line. That was the best part, seeing the looks on their and their crew’s faces as what they accomplished sunk in. It was pretty magical.

We couldn’t be happier with how everything went. This is our dream job, and we love it. When you think of Nebraska, you probably don’t think about ultra-running or the potential for a world-class race. That is what we are trying to change with the Cowboy 200.

The Cowboy 200 will have a big sister race in 2023, the Katy 225, and together they will make up the Midwest Rail Trail Double. Finishers of both races will receive a unique award, so make sure you check them both out!